It was once just an empty field, sandwiched between Woodfarm Lane and the main road linking Lowestoft and Great Yarmouth.

But in the late 1970s, this parcel of land became home to one of the biggest construction sites on the East Coast - and a hive of activity.

Among the first on site was digger driver Keith Greensides, who worked for local company EE Green. Keith drove his Massey Ferguson digger onto the site one morning in 1976.

In front of him was a grass field with some pegs in the ground, marking the path that he needed to follow to dig the very first trench - making him the first person to turn the soil on the site.

“It was just a wide open space, nothing there at all,” he recalled. It was the start of two years’ work on the site for Keith, who dug a range of trenches for foundations, some as deep as 12 feet.

But he made sure he was comfortable while working - fitting out his digger with a radio and even carpet.

“It was a really enjoyable job,” he said. “And when I drive past now, it’s nice to think I had a part in building the hospital.”

The first team on site were the Clerk of Works and Site Engineers team.

Among them was administrator Valerie Huggins, who started work in January 1978, based in a wooden hut erected near to where the helipad now sits.

The hut was basic, with just five rooms, with the largest used to keep all the hundreds of plans and drawings containing all the detail needed to construct the hospital.

It was the job of the Clerk of Works’ team, who were employed by the Regional Health Authority, to ensure that the plans were followed to the letter by the construction team, who were housed in a similar hut nearby.

Valerie continued in her role for three years - by which time the first phase of the hospital had been completed.

“We were the very first people on the site,” she recalled. “During my three years, I watched the hospital grow from what was a field, into the building it is today.” 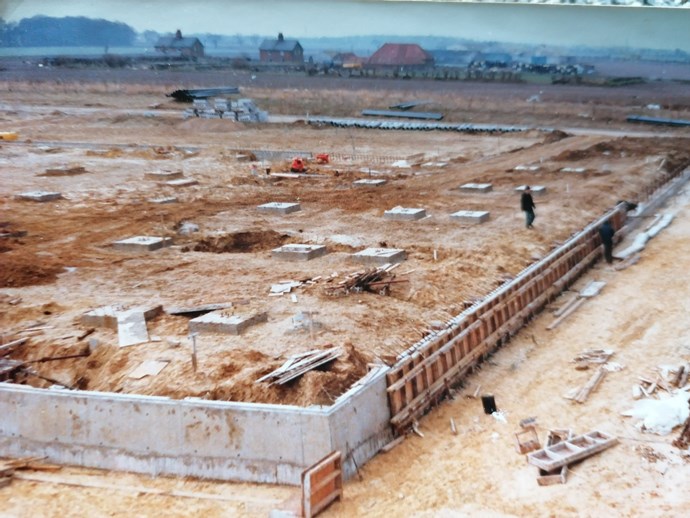 Also on site in those early days of construction was Alan Weston, who you may just be able to spot in the photo above - he's in an orange hi-viz jacket in the centre of the photograph. He was part of a team putting in some of the miles of pipework across the site.

Many of these pipes would lead to a giant sewer system, designed by Colin Wright.

Colin’s involvement with the creation of the James Paget preceded even the turning of the first sod.

In 1976, when the site still a field, Colin was working as the Senior Engineer for Great Yarmouth Borough Council, which was engaged by the Health Authority to assist with the design of the sewerage system for the new hospital.

Colin designed the sewers leaving the main hospital site, and the large connection to the public sewer system at Brasenose Avenue. His working also included preparing the contract documents, appointing the contractor and supervising the actual construction of the sewers, which took place before any other work had started on the site.

“The tunnelling works involved what is known as a thrust bore or ‘pipe jacking’ type construction - a form of trenchless technology - approximately 6m deep from the direction of what is now the Louise Hamilton Centre,” he recalled.

“It went under the access road between the residential properties, connecting into the main sewer in Brasenose Avenue. The connection was made via a 4.5m diameter shaft almost 9m deep occupying the full width of the carriageway.”

The ‘pipe jacking’ involved lowering a metal shield into the ground. The shield was slightly larger than the sewage pipe diameter and had a cutting edge which was forced ahead by hydraulic jacks into the subsoil consisting of pure sand.

The shield offered protection to the workmen, allowing them to safely excavate the sand by hand at the tunnel face. The excavated material was removed in small wagons on rails and lifted to the surface.

You can hear Colin talking more about the construction process in our video below.