Who was Sir James Paget?

In January 2014 medical professionals came together to celebrate the life and work of Sir James Paget on the 200th anniversary of his birth.

Who was Sir James Paget?

‘Work itself is a pleasure.’ 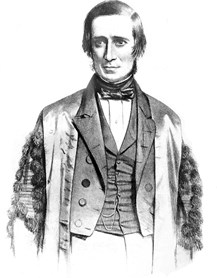 Sir James Paget, 1814 – 1899, was an outstanding medical man of the 19th century, known best for his reports and studies of the progressive bone disorder known as Paget’s Disease of the bone, or Osteitis Deformans.

James Paget was born on 11 January 1814 in a mansion on South Quay, Great Yarmouth, and was educated at Reverend Bowles private school in Queens Street. His success was based on his great knowledge of pathology and physiology and he is regarded as the father of British pathology.

He stressed the importance of bringing science into medical practice.  In the mid 1800s he supported the ideal of women becoming doctors and was very willing to try new medical treatment methods. He was a very popular teacher, a great orator, fine writer and was passionate about good patient care.

Besides describing Paget's disease of bone and Paget's disease of the nipple, for which he is well known, James Paget was the first to describe eight other conditions, one of which was compression of the median nerve known today as 'carpal tunnel syndrome'.  He was also the first surgeon to experiment with using water beds to help patients with bedsores.

He was President of the Royal College of Surgeons of England, a Fellow of the Royal Society and Surgeon to Queen Victoria for 41 years.

Sir James officially opened the old Great Yarmouth General Hospital in 1886. Selecting James Paget as the name for the new hospital took over five years and involved a great deal of heated debate.

In January 2014, medical professionals from across the East of England came together to celebrate the life and work of Sir James Paget.  Read more >>