A retired electrical engineer from Ormesby in Norfolk helped improve healthcare for the people of the county as part of the original team who built the James Paget University Hospital NHS Foundation Trust (JPUH) back in the early 80’s.

Now, 40 years later, by taking part in a study that has found a way to treat some patients with severe COVID-19 symptoms, he has helped people right across the world. 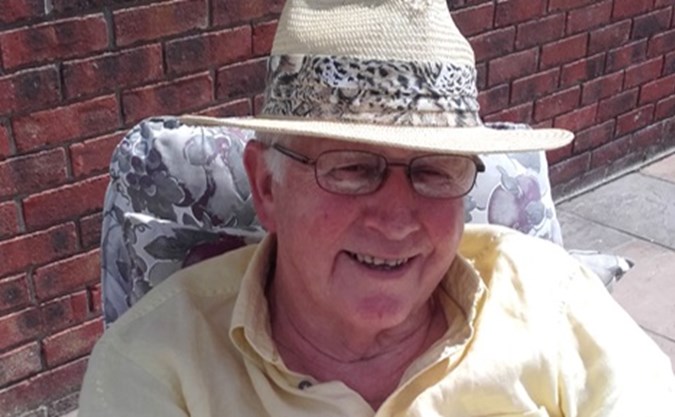 John Kippen, 73, was taken ill with COVID-19 in March this year. When a close friend noticed his health had declined to worrying levels over the course of a few days, an ambulance was called, and Mr Kippen was taken to JPUH where he was admitted to the Intensive Care Unit (ICU) straight away.

He said: “I’m normally very fit and healthy, I’ve run 7 London Marathons, 4 Great North Runs, I’ve played cricket, football, badminton - you name it, I’ve done it. It’s just this horrible bug got me and that’s where I ended up.”

Mr Kippen (pictured above) spent two weeks in the ICU at JPUH. It was here at the hospital he had helped to build that Mr Kippen was given the opportunity to take part in the RECOVERY trial, on the arm testing dexamethasone. The trial is one of a number funded and supported by the National Institute for Health Research (NIHR) on behalf of the UK Government’s Department of Health and Social Care.

It is thanks to the trial, and those like Mr Kippen who have taken part in it, that we now know this commonly used steroid can reduce loss of life in patients with severe COVID-19 symptoms who are on ventilators by up to a third (and those on oxygen only by up to a fifth).

Although Mr Kippen lost over 2 stone during his illness, having been home for over a month, he is feeling much better.

He said: “I’m thrilled to have been part of this! Obviously, there have been so many unknowns attached to this, so if I’ve helped others by taking part, that’s fantastic. All the nursing staff were brilliant, I can’t fault them in any way and can’t speak too highly of them.

“My legs lost a lot of weight and fitness. I’m still trying to put that on, but I seem to have put it all on in the tummy region so far! The thing is though, I feel good and that’s the main thing.”

Mr Kippen, a father of two daughters, has fond memories of helping to make sure all wards in the hospital had the systems they needed to be up and running in time for opening in July 1982. He also spent many years there following this, working with staff in all departments to make sure all things continued to run efficiently.

He said: “I got on very well with all the staff and we worked hard to make sure that the wards were equipped from a services point of view as best as possible.”

Professor Ben Burton, Clinical Research Director at the Trust, is keen to thank all those involved in research there: “I am incredibly proud of my team here at JPUH who have worked, and continue to work, tirelessly to deliver the NIHR’s trials to find treatments for COVID-19. This research is not possible without the participation of patients like Mr Kippen though, and we are incredibly grateful for their involvement.”

Dr Helen Macdonald, Chief Operating Officer for the NIHR’s regional Clinical Research Network, said, “Well done to the team at JPUH who, along with our NHS partners across the region, have galvanised with great speed to bring this vital COVID-19 research trial to their local community. We still have many more answers to find to help more patients, so please visit BePartofResearch.uk to find out how you can get involved.”

The NIHR is supporting and/or funding around 48 COVID-19 Government prioritised studies. They include vaccine trials, and trials testing devices and medications, some of which are already widely used in the NHS for other conditions. To find out how you can get involved in research in COVID-19 and other conditions, visit www.bepartofresearch.uk.