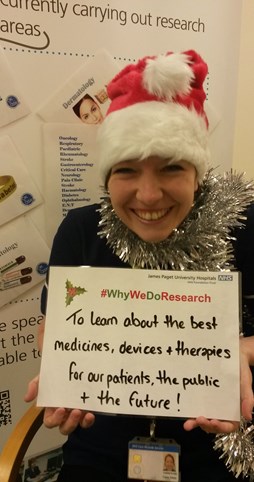 The Research and Development team at the James Paget University Hospital (JPUH) has started a Twitter trend with the hashtag #WhyDoWeDoResearch.

The team has been tweeting photos of JPUH staff wearing a Christmas hat, reindeer ears and / or tinsel describing why research matters.

And the campaign – started as a way of highlighting the research work done at the JPUH - has been picked up by four other NHS Trusts and has received support from researchers and followers in China, America and Australia.

Claire Gibbs, senior clinical research nurse, devised the campaign as a way to raise awareness of research across the Trust and wider.  Each day a different photo is tweeted by @JPUHResearch with the #WhyDoWeNeedResearch hashtag.

She explained: “The photos have almost turned in to a competition as to who can be the most Christmassy and who can write the best reason! Representatives of most departments in the Trust, including some of the executive team and some governors are involved.

“Initially we planned a campaign of one photo a day for one week in the lead up to Christmas. When we shared the idea of a #WhyWeDoResearch campaign with our followers, the response was so huge and people wanted us to start immediately – so we commenced the campaign on 8 December. ”

The National Research Nurse account @resnurse, a nationally recognised twitter research nurse group, has used the @JPUHResearch campaign as an example of ‘leading the way forward in promoting the skills and importance of research in the NHS and globally.’

“Loving #WhyWeDoResearch from @JPUHResearch - what a lovely idea… exciting and inspiring”