Grand Opening for 'The Cove' 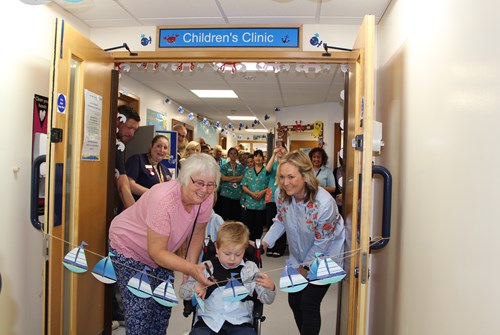 The Cove – the James Paget University Hospital’s new children’s outpatient clinic – has celebrated its first year of operation with a formal opening ceremony.

The clinic was set up in 2016 in an area of the hospital which was completely refurbished to create a bright, clean and colourful place for young people to come into for their treatment.

The new facility was created following feedback from Care Quality Commission inspectors, who gave the hospital an overall rating of ‘Good’, but highlighted several areas where improvements could be made. These included a recommendation to enhance children’s outpatient facilities which, at that time, were in part of the hospital shared with ante natal patients.

Today, Thursday 10 August,  the work put in to establish the clinic was celebrated, with many of those involved in setting it up, as well as patients and current staff, attending a special ceremony to formally launch ‘The Cove’.

Instead of ribbon, a string of paper boats was cut by eight-year-old patient Drew Bye and former staff member Rachel Short, who was responsible for the original children’s outpatient department at the James Paget hospital.

Children’s Clinic senior sister Jo Scott said; “It may seem a little strange to be holding an opening ceremony a year on but we needed to learn how to work in the facility and to settle in. It was such a significant change for us. In the old clinic we had one room available in the morning for children’s outpatient services and six rooms in  the afternoon. Working with children alongside expectant mothers presented a number of issues and the CQC clearly recognised this, leading them to make the recommendation for a separate facility.

“Fortunately there was a solution – the old Bure Clinic was converted into the new dedicated clinic – and we now have eight rooms available to us all the time, along with specific areas for older and younger children. Previously young people had to go to different areas of the hospital to access outpatient services but now the vast majority can be completed here. We have eight consultant paediatricians who work across a range of specialisms and have multi-agency clinics where therapists and dieticians can also help.

“There are simple things – such as having two height and weight measuring rooms – which means we can treat patients more quickly and efficiently, as well as improved facilities to make the environment friendlier and more comfortable for young people who have to undergo outpatient procedures.”

The refurbishment saw the building being decorated in neutral colours throughout, leaving a blank canvas for the team who decided to call the new clinic The Cove and to take this seaside theme a stage further with colourful sea creatures adorning not only the clinic itself but also other walls around the hospital.

“Younger children can follow the creatures through the hospital to the clinic,” said Jo,  “and when they arrive we have plenty of toys for them to play with while they are with us.  The new clinic allows us to treat young patients in a more comfortable and pleasant environment, which has benefits for everyone.

“We’d like to thank Drew and Rachel  for coming along to open to formally launch the clinic. Drew has been coming to the clinic since he was a baby and he and his family are great advocates of the services, while if Rachel hadn’t done everything she did we wouldn’t be here today. While we couldn’t invite everyone, we wanted as many people who have played a role in establishing the clinic as possible to be here to see how far the clinic has come.”

Over the past year more than 10,000 children and young people have attended their appointments, with an extra 2,570 attending compared to the previous year. On average, figures show the clinic is seeing well over 200 extra patients per month more than they were before.