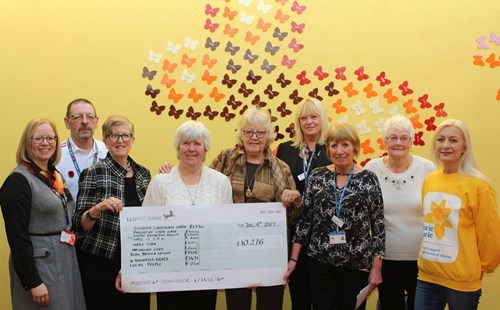 Several charities and groups – including the Louise Hamilton Trust, the Sandra Chapman Centre and Ward 17 at the James Paget University Hospital - have benefited from more than £10,000 collected by local fundraisers.

A total of £10,276 was raised through a variety of activities including cycle rides, the sale of knitted Easter chicks, coffee mornings and car boot sales, and was divided between the charities which provide care and support for patients.

Zoiyar and Janet have between them raised well over £300,000 for good causes in 17 years of volunteer work.

Helen Rowe, Palliative Care East Administrator at The Louise Hamilton Centre, said: “We are very grateful for Zoiyar, Janet and Brenda’s support. Their efforts are amazing and they have raised so much money for these good causes. The funds will go towards our work with patients and we thank them for this generous gift."