After Australia was hit with their worst flu outbreak on record in 2017, staff at James Paget University Hospital – and eligible members of the public - are being urged to get their flu vaccination ahead of the winter season.

James Paget University Hospital Deputy Medical Director Hazel Stuart got the flu last year. She explains why she believes hospital staff and members of the public should get the flu vaccination and why ‘herd immunity’ counts.

“I had the flu jab and I still got flu!

“I told you so, I can hear some sceptics saying – why did you bother?

“Last autumn I had my jab as I do every year – and had no side effects from the jab at all.

“I know it doesn’t cover coughs and colds and I had the odd one or two over the winter as usual.

“Then I worked a shift on a Monday where there were several members of staff coughing and some poorly patients as well. On Thursday I worked as normal and felt quite well and at the end of the day I picked up my elderly mother (she is in her 80s so I think she won’t be too upset at being called elderly) who had undergone a minor day case procedure under local anaesthetic that afternoon.

“After taking her home, making her some food and checking she was alright I went home and just before going to bed thought I had a slightly croaky voice.

“I woke on the Friday and felt quite unwell with a sore throat. By lunchtime I had a temperature, which settled with some paracetamol, but by 6pm I felt terrible and had to go to bed.

“The next 48 hours were dreadful.  My temperature was up above 38C despite regular paracetamol, there were horrible sweating episodes, my head throbbed and I couldn’t think straight. My muscles ached and I could only just walk from the bedroom to the kitchen with difficulty. Saturday was the least romantic wedding anniversary we have ever had.

“On Sunday evening my mother called to say she was feeling unwell and by Monday it was obvious she had caught flu from me - before I had even realised I was ill. As she has other medical problems it really was a serious problem, and I wasn’t well enough to look after her.

“Finally by Tuesday my temperature settled and I was left with some minor cold symptoms but also overwhelming exhaustion and muscles that could not do anything.  This improved very gradually but two weeks after the first dry throat I was still not back to normal.

“So the flu jab didn’t work? There is a failure rate of approximately 40-50%, from both the fact that the strains of flu can change and individual reasons, so I may have just been unlucky to have been one of those to get flu. However, I am convinced that having the jab has given some protection and this was especially so for my mother who wasn’t quite as bad as me, and I am convinced that if she had not been vaccinated and had some protection she would have ended up in the James Paget.

“Will I have the flu jab again? Absolutely.  If it even offers me a 50-60% reduction in the chance of catching it and feeling as dreadful as I did, it will be worth it.

“If it decreases the chance of me infecting my family when I didn’t even have symptoms (you are most infective the day before and the first day of the flu) it will be worth it. Luckily I didn’t see patients on that day but, had I done, I could have passed it to some vulnerable people as well.

“Colleagues have said they think having the vaccine affects their immunity e.g. against colds but there is no evidence for this to my knowledge, and we are all working with evidence based medicine for everything else we offer to our patients.

“There is also what is called ‘herd immunity’.  This when you need a certain percentage of people within a population or group (such as hospital staff) to be vaccinated to stop the viruses being able to be passed around  – so even if the odd case does arrive, as it will do, it isn’t able to spread to a significant degree.

“This means it will protect even those people that the vaccine has not worked well for this year, and the few that genuinely can’t have it.

“To start to be effective, this needs to ideally be 80-90% of the population – i.e. both clinical and non-clinical staff within the hospital.  Last year we reached just over 65%, our best result yet, but we are aiming for at least 80% this year.

“By being vaccinated you are stopping the spread to patients and colleagues as well as protecting yourself and your family.

“Why wouldn’t you have it? You really don’t want to be that ill and you wouldn’t want to put others at risk so, unless you can’t, I would urge you to consider getting the vaccination as soon as you can.” 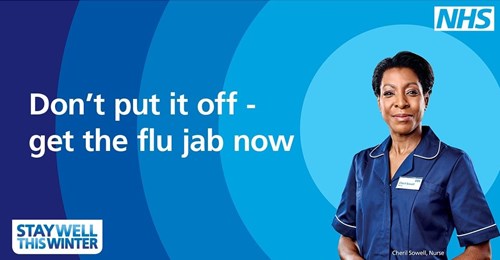