A payroll clerk at the James Paget University Hospital is travelling to Kenya to compete in the World Scrabble Championships next month.

John Ashmore, from Bradwell, spends his days looking after numbers to ensure staff at the hospital are paid, but after work his focus is on letters and words – and he’s recognised not just as one of the top Scrabble players in the country but as one of the best in the world. 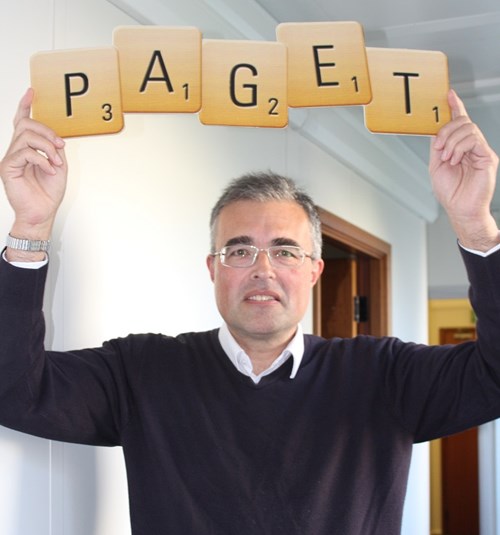 He will be putting his talents to the test again when he flies out to the Kenyan capital Nairobi to compete in the World English-Language Scrabble Players Association Championship 2017, being held between Wednesday 8 and Sunday 12 November.

John was asked to go to the tournament in June after being selected to represent his country in the championship and he will be one of up to ten players taking part for England against competition from across the globe.

More than 100 competitors from countries including Nigeria, Australia, Thailand, India, Pakistan, New Zealand and the USA will take part with each participant completing 32 games. Following these games the two top-ranked players go head-to-head in a best-of-seven-games final to find the winner.

While John started playing the game as a child, he only took up Scrabble seriously in 2000 but since then has worked his way up to compete at the top level. He took part in the 2015 world championships held in Perth, Australia, winning 16 of his 32 games and achieving a highest game score of 538, placing him in the best 100 players in the world.

John says; “I’m looking forward to the trip, which includes five days for the championship and four days for trips in Kenya, which I hope will include a safari. Once the tournament starts my aim is to win more than half my games and to do at least as well as I did in Perth.

“I have been working hard to improve my game but I know other competitors will be doing the same. There are a number of resources online and computer programmes that you can use to learn new obscure words that you would normally never use, and there are new teenage whizz kids every year, so the competition is tough and across all age groups.

“While you would think you need to be good with words to be a good Scrabble player, it’s not about understanding their meaning. You’d be surprised at how many top players are mathematicians, as you are constantly having to weigh up probabilities to work out what the best moves are.”