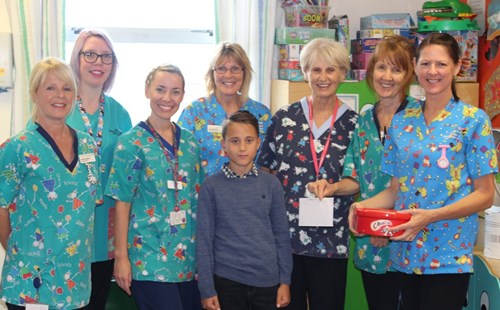 An eight-year-old boy has generously donated his birthday money to the Children’s Ward and Intensive Care Unit at the James Paget University Hospital.

Kallum Breeze was admitted to the hospital following an asthma attack and was later transferred to Addenbrookes.

He decided that, instead of presents for his birthday, he would ask for money that could be donated to those that helped him and today, Monday 23 October, visited the Children’s Ward 10 to hand over £100 for the ward and a further £100 for the Intensive Care Unit.

Kallum’s dad Steve and mum Gaynor came with him and the family also handed over chocolates for the team.

Gaynor said; “He just wanted to do something to say thank you to those who helped him.”