The Health Service Journal (HSJ) Awards have shortlisted the Trust’s Kissing Goodbye to Sepsis campaign in the Patient Safety category, while the #WhyWeDoResearch Twitter campaign has been shortlisted in the ‘Improving Care with Technology’ section.

The Kissing Goodbye to Sepsis campaign aims to raise awareness of this life-threatening condition to help identify and treat it quickly – which can be crucial to patient care and recovery.

Sepsis occurs when the body’s response to an infection injures its own tissues and organs. It can lead to shock, multiple organ failure and death if it not recognised early and treated promptly. Sepsis is one of the biggest killers. Every year there are 150,000 cases of Sepsis in the UK resulting in a staggering 44,000 deaths - more than bowel, breast and prostate cancer combined.

Since introducing the campaign the James Paget University Hospital has seen a positive change in culture brought about by the campaign, which encourages all health professional within the hospital to be alert for the symptoms.

Nurse Joan Pons-Laplana is leading the drive, with others, to help staff identify patients with Sepsis quickly, as administering anti-biotics within 60 minutes can save lives.

“It’s amazing to be shortlisted for an award. It has been the hard work of staff at the hospital that has made the James Paget one of the best and most improved in the country.

“When we started the campaign we were average in national tables, but this was not good enough. We formed a group including doctors and A& E nurses to see what could be done to improve awareness. We wanted every front line professional – anybody who came into contact with a patient – to be able to identify symptoms and to ask ‘could this be Sepsis?’.

“When identifying Sepsis set observations are the key. We wanted to make it easy, so we created a new form on the back of the hospital’s observation chart with simple tick boxes to identify red flag symptoms and help recognise the condition – if any one of seven key factors are identified it is escalated. We also empowered nurses to be able to administer the anti-biotics if Sepsis was suspected, giving them the opportunity to intervene quickly.”

Joan says; “There’s nothing better than knowing this work is saving lives and we’re now sharing this good practice with other trusts. By treating quickly we’re also reducing the length of patient stays in the hospital which has benefits for everyone.”

The #WhyWeDoResearch Twitter campaign has taken off world-wide after being launched by a senior research nurse at the James Paget. What started as a local initiative to highlight the importance of medical research quickly grew to achieve global success – with 50 million page impressions in the first year and thousands of Twitter users in the research community adopting it to share ideas and to raise awareness of their work and opportunities for patients and the wider public to get involved.

Julia Hunt, Director of Nursing said; “I’m delighted that the James Paget has been shortlisted for these prestigious awards, as it shows the excellent work that nurses are leading to drive innovation to improve our services for patients is being recognised at a national level. Coming so soon after the shortlisting for the Nursing Times Awards we’re really pleased that this work is being highlighted as good practice.”

Presentations will now be made to a judging panel before the winners are announced at the HSJ Awards ceremony in London on 22 November. 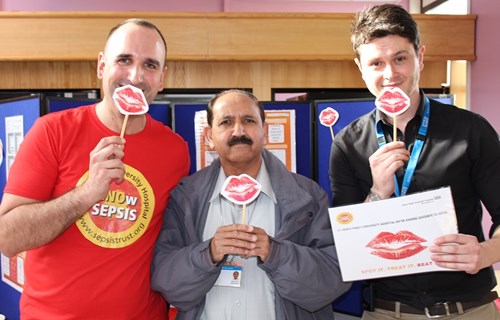