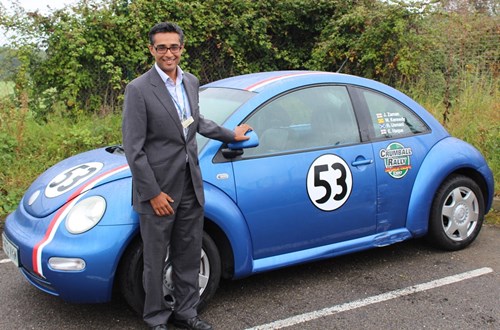 A consultant cardiologist at the James Paget University Hospital will be taking to the roads of Europe later this month as part of the 2017 Crumball Rally.

The unique rally is being staged from Friday 15 to Sunday 17 September and sees well-used classic cars – also known as old wrecks - being driven 2,000 miles across Germany, into Poland and back to Germany via the Czech Republic in just three days.

Consultant Dr Justin Zaman and three of his friends will take part in the rally in his 2001 VW Beetle ‘Vicky’ – and they are gathering sponsorship to raise as much money as possible for the British Red Cross.

The 2017 Crumball Great Escape is themed loosely on the sixties film and the route will take in several historic wartime locations including Colditz and Stalag Luft III, on route between Koblenz, Prague and Munich.

Teams and vehicles are expected to be in fancy dress and there are a host of film-related challenges on route for the drivers and passengers of the 80 cars involved in the rally.  Prizes are up for grabs for completing the challenges and for best ‘pimp my ride’ paint scheme, among other categories.

Vicky is regularly seen in the JPUH hospital car park and, while many of the vehicles are scrapped following the rally, Dr Zaman will be driving her back to the UK before she is passed onto a young relative who will be her new owner.

“I bought Vicky when I became a registrar and she has been with me through many important life events but is now on her last legs. We hope she will get us through Poland, the Czech Republic and Germany without too many problems! It’s all for a really good cause – the British Red Cross, who have done amazing work this year after tragedies in Manchester and London and continue to work both in this country and abroad.”

For more details about the rally please see www.crumballrally.com/thegreatescape2017.php and you can donate to Justin and his team here: www.justgiving.com/fundraising/eyeedul-riaz-justin-wayne-team-herbievorsprung .