Cuddle cot donated to the Paget

A special cot which allows parents to spend more time with their baby following still birth or neonatal death has been donated to the James Paget University Hospital by the charity Sands, after fundraising by an Ipswich woman and a couple from Kings Lynn.

The cuddle cot is specially cooled to allow families the opportunity to have more time with their child. Without such a cot families can only spend a few brief hours with their baby – the cot can extend this period to allow time to make memories, to hold their baby and to say goodbye.

The cot for the James Paget has been funded via donations from Emma Hall and Rob Fakenbridge, from Kings Lynn, whose son Alfie died seven years ago after an emergency C section at 31 weeks, and their friend Tracey Poll, from Ipswich, who runs a fabric company and who wanted to support the couple.

Emma said; “I had pre-eclampsia at 30 weeks and had steroid injections but then had to have an emergency C section. We had 18 hours with Alfie, and we still relive that day, but we carried on. We had our third son Joshua later as we didn’t want our first son Jay to be an only child.”

Tracey, who runs the Splashings of Fabric website, decided she wanted to help the couple to do something to support other parents facing a similar situation and began raising money for Sands in memory of Alfie. She set up a Just Giving page and employed a fabric designer to reflect the themes of loss and hope and sold the fabric to raise further funds, raising more than £1,500 for the special cot.

Tracey said; I’ve known Emma for a long time and I wanted to do something to help. Through the sale of the fabrics and donations we managed to raise the funds for Sands, allowing the cuddle cot to be donated to the James Paget.”

Sands have, for the past 40 years, worked to improve the quality of care offered during pregnancy and the support available to parents and families in the event of a baby dying.

Sands Director of Bereavement Support and Volunteering Jen Coates, who came to the James Paget with Emma, Rob and Tracey to hand over the cot, said; “There is still a real taboo around parents being able to talk about stillbirth and neonatal death, and we want to facilitate those conversations and ensure there is the right support for mums and dads when a baby dies.

“Part of Sands aim is to have a bereavement suite in every hospital, so when a baby dies parents have somewhere away from the busy delivery suite to have time with their child. This time to make memories is crucial and a cuddle cot is an essential part of that. We also want parents to have access to a specialist bereavement midwife and are pleased that the James Paget now has these facilities.

“That parents and friends manage to turn grief into something positive for others is inspiring. Thanks to them and their supporters other parents will have the opportunity to spend more time with their baby.”

James Paget Head of Midwifery & Gynaecology Services Jayne Utting said; “I would like to thank Emma, Rob and Tracey for their work in funding this special gift for us at James Paget. Sands always pass the donation to where it is most needed so although we may not have had any prior connection to the couple we were the lucky unit to benefit from their generosity. This will make a big difference to families going through a bereavement and we are very grateful for their support.” 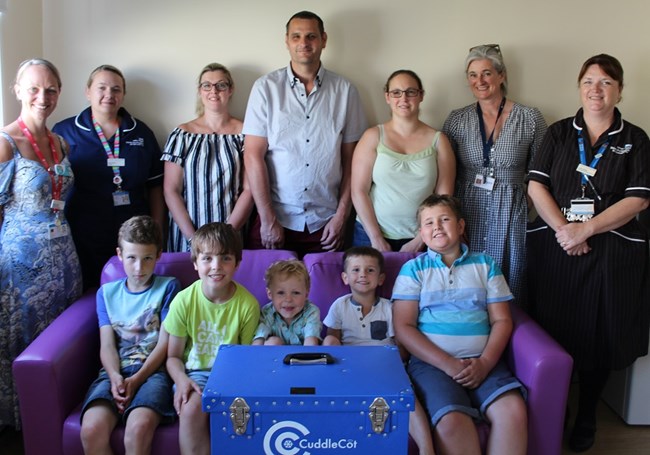