A cheque for £1,000 has been presented to the Audiology team at the James Paget University Hospital by the Enterprise Rent-A-Car Foundation. 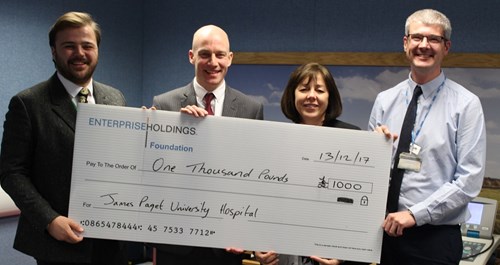 Account manager Chris Whatling and Great Yarmouth branch manager Nathan Freeman-Hooper came to the James Paget on Wednesday 13 December to hand over the cheque to Jenette Powell and Gary Osborne from the Audiology Department.

Money is raised both via the company profits and the individual efforts of members of the Enterprise team and the £1,000 donation will now be used to fund several pieces of kit for the Audiology department at the hospital, including a new reclining chair for patients undergoing diagnostic hearing tests.

The existing chair has seen better days after years of use by children and adults. A comfortable chair makes a big difference when a patient is undergoing detailed advanced hearing tests as it allows the patient to relax which makes the testing easier to carry out.

Although it will be used for patients of all ages, in the main it will be used by parents of newborn babies who have been referred from the Newborn Hearing Screen for further testing. The parent will be able to sit comfortably while they hold their baby during the testing.

Head of Audiology Jenette said: “It is important babies and older patients are as relaxed and still as possible during the tests, otherwise the equipment can pick up signals other than those we are trying to detect. We test some babies as young as two to three weeks old.”

Gary said; “The national Newborn Hearing Screening Programme, that was introduced by the James Paget in 2004, means all parents of newborns are offered screening hearing tests to allow for the detection and early diagnosis of any hearing loss.

“The early detection of hearing loss means youngsters can be fitted with hearing aids or can be recommended for a cochlear implant if necessary. Early diagnosis significantly reduces the difficulties that may be faced by children with hearing impairment and improves their overall outcomes, in contrast to before the Newborn Hearing Screening was introduced, children could be three to five years old before problems were identified.”

Chris Whatling said he was pleased to be able to hand over the cheque on behalf of the Enterprise Rent-A-Car Foundation and that the company was continuing to work to support the hospital.

“It has been part of the company philosophy to support good causes in the local communities we serve and our managing director is passionate about spending money locally to help where we can. We’re delighted that we have been able to support the hospital Audiology team and are particularly pleased that the money will be spent supporting babies and young children.”

The Enterprise Rent-A-Car Foundation, the car rental company’s philanthropic arm, was established to give back to the communities in which it operates.