Two sisters who have together clocked up 70 years’ service in local healthcare have been invited to join national celebrations as the NHS reaches an historic milestone. 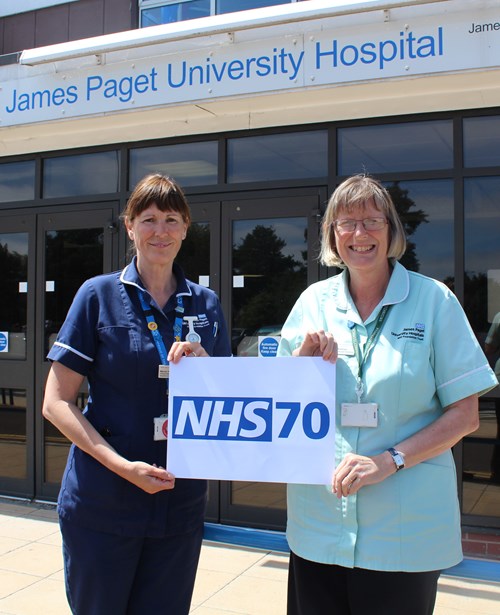 Angela Meadows and her sister Marian Hunt, who both work at the James Paget University Hospital, have received invitations to two prestigious events to mark the NHS’ 70th birthday next week.

Pharmacy technician Angela, 59, will be heading to Westminster Abbey with hospital Chief Executive Christine Allen next Thursday (July 5) for a celebration service.

Before that, on Tuesday (July 3), 53-year-old Marian, who is a clinical educator in practice development, will be attending an event celebrating innovation in nursing and midwifery in Nottingham.

The sisters, who are both from Lowestoft, both said they were delighted to be representing the James Paget at the national celebrations.

“I feel very honoured and proud,” said Marian, who started her career at the James Paget’s Broadland School of Nursing in 1983 before spending 25 years at Lowestoft Hospital where she was a staff nurse.

In 2010, Marian moved to the James Paget as a urology specialist nurse before joining the clinical education team in 2013.

“I love working for the NHS. Nursing is very hard work but it is so rewarding – and it’s great to be working at a hospital where we are very much a team,” added Marian.

“Things have progressed so much since I started work. Years ago, as a nurse you were simply told what to do. Now you are encouraged to be innovative, work as part of team and can make a real difference for patients.”

Angela also began her career at Lowestoft Hospital, starting work in 1976 as one of three pharmacy staff at a time when it was a small general hospital, dispensing medicines to both inpatients and outpatients.

At that time, tablets came in bulk containers, had to be counted out by hand – and labels for bottles were created on a type writer. There were also just half-a-dozen or so types of antibiotics compared with more than 35 today.

In 1981, Angela moved to the brand new James Paget Hospital – and became part of a 50 strong pharmacy team.

Since then, she has performed a number of roles in the team and currently works as a pharmacy home care technician, overseeing the delivery of drugs to patients’ homes.

“I have really enjoyed my career in pharmacy,” said Angela. “The developments over the years have been quite remarkable, particularly the increase in the number of drugs available which helps improve the lives of so many patients, and I’ve always felt it is a privilege to serve the community.”

The sisters have a combined total of 70 years’ service, with Angela currently on 37 years as she took five years off to look after her children, with Marian on 33 years after doing the same for two years.

Angela and Marian are not the only James Paget representatives travelling to the two celebrations next week.

Junior doctor Amy Reynolds will join Angela and Christine at Westminster Abbey while nurse Natalie Brooks, who works in the hospital’s Emergency Assessment and Discharge Unit, will go to Nottingham with Marian.