Hundreds of people have been helped towards recovery following treatment at our hospital as part of a nationwide challenge to encourage patients to get dressed and moving.

The James Paget has joined hospitals across the country  taking part in the nationwide 70-Day #EndPJparalysis Challenge which aims to help patients get mobile to prevent deconditioning. The campaign runs until 26 June and aims to achieve one million patient days of people up, dressed and moving in their own clothes, rather than in hospital gowns or pyjamas (PJs).

So far more than 2,900 patients at the Paget have been helped to get dressed in their own clothes and more than 2,600 have been assisted to get more mobile since the campaign started on April 17. 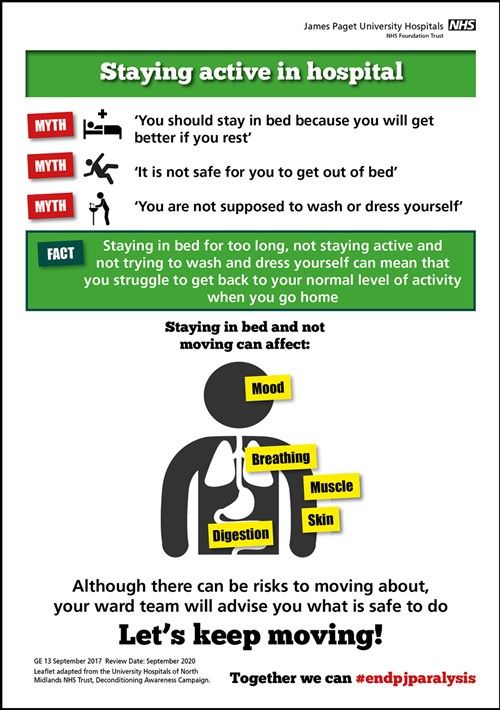 The hospital previously took part in the Eastern regional #EndPJparalysis campaign in the run up to Christmas 2017, which also aimed to put a stop to a cycle of deconditioning that can occur when a patient is confined to bed. Prolonged bed rest can increase the risk of falls due to muscle weakness, lead to increased confusion or disorientation and contribute to poor digestion and decreased appetite, incontinence or constipation. Ten days of bed rest for a person aged over 80 ages the muscles by ten years.

As part of the initiative we’re continuing to encourage patients, their families and friends to ensure anyone coming into hospital has day-wear clothing and shoes with them to facilitate them getting moving around as soon as they are able to. 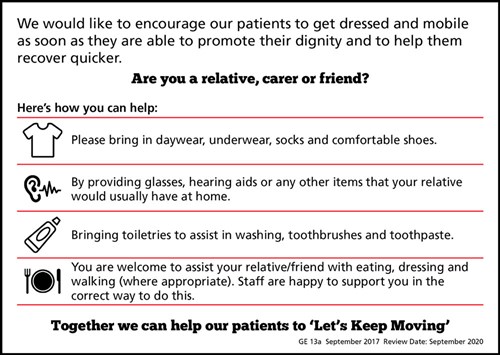