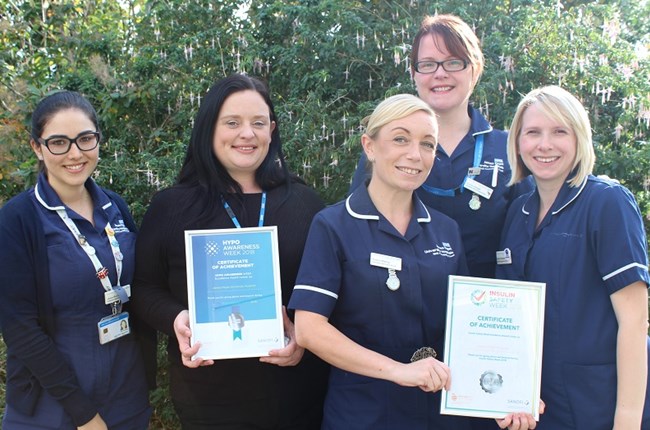 The team’s work to raise awareness of Hypoglycaemia, also known as low blood sugar, among colleagues at the hospital and the wider public during Hypo Awareness Week at the end of September, and their work to promote Insulin Safety Week in May, has seen them gain national recognition for their efforts.

They collected a silver runner-up badge in both awards after being praised for their engaging campaigns.

Hypoglycemia, when blood sugar decreases to below normal levels, mainly affects people with diabetes and is known as a ‘hypo’. It may result in a variety of symptoms including sweating heavily, feeling anxious, trembling, going pale, slurring your words, being unusually aggressive or tearful, confusion and, if you don’t treat your hypo at that stage, loss of consciousness. Hypos can be caused by things such as taking too much insulin or too many diabetes tablets, delaying or missing meals, eating less starchy food than usual, drinking too much alcohol or drinking alcohol without food, unplanned or strenuous activity or hot weather.

If you recognise you’re having a hypo then you should treat it immediately with something that will raise your blood glucose quickly such as a small carton of smooth orange juice, four large or seven small jelly babies or five or six dextrose tablets.

During the week the team raised awareness among staff and patients through a stand in our hospital restaurant as well as visits to various wards and departments with a trolley of information about hypoglycaemia and recent changes in the guidelines for treatment. The team worked to make the education a little bit more fun and engaging by distributing hypo treatment to staff and encouraging them to make use of a selfie frame and props for photographs after they completed a mini questionnaire.

The Insulin Safety Week award came after the team set up a stand to provide colleagues with information about the different strengths of Insulin and the correct use of devices. The aim was to share good practice to improve diabetes care and to support the national campaign to help reduce errors and promote insulin safety.