Our Safeguarding Assistant Jane Oldman has been formally recognised for all her work to establish Domestic Abuse Champions at the James Paget. 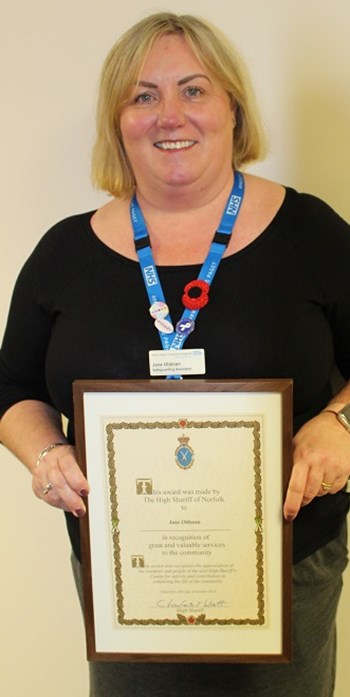 Jane is well-known around the hospital as a key part of the Safeguarding team, and her work to set up a network of staff to help support colleagues and patients who may be in abusive relationships has now gained county-wide recognition via an award from the High Sheriff of Norfolk.

Thanks to her, more than 30 staff members have become Domestic Abuse Champions – recognisable by a dark blue badge that they wear – and they are there to provide assistance to anyone who may need it. They act as a point of contact for staff, patients and visitors and anyone can approach them for advice and signposting to further assistance.

Jane has also been working closely with local charity organisations who work to support survivors of domestic abuse including Waveney Domestic Violence and Abuse Forum, Leeway and Lighthouse Women’s Aid  and provides co-ordination and training to all our Champions.

Her work was acknowledged during the High Sheriff Awards last week when she was one of just two people presented with a certificate for ‘great and valuable services to the community’.