Our Stroke Therapy Team have raised more than £850 for the Stroke Association after completing a 5K run inflatable obstacle course earlier this month. 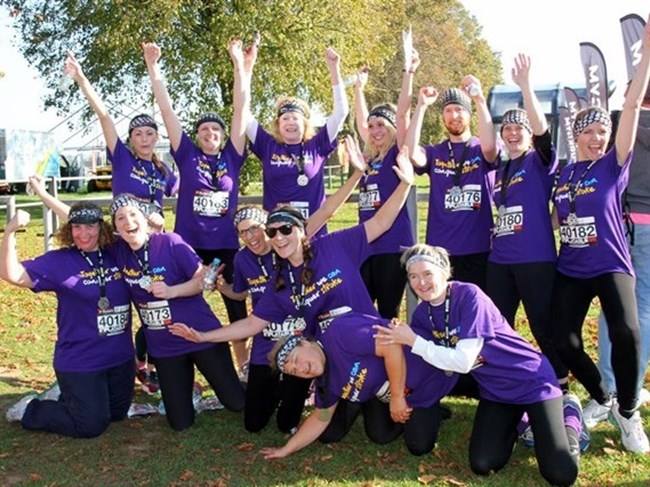 The team, based on both the Stroke Unit (Ward 1) and the Early Supported Discharge Team in the community, completed the course at the Norfolk Showground on Saturday 20th October to raise money for the charity.

Stroke Association provide support to many of our stroke survivor patients and their families and the team wanted to show their appreciation for the charity by doing some fundraising for them.

Jo Symington, of the Ward 1 team, said; “We had an amazing morning jogging, diving and taking a big leap of faith all in aid of the Stroke Association! Thanks to all our sponsors, we are delighted with how much has been raised and I know the Stroke Association will be grateful. As Occupational Therapists, Physiotherapists and Speech and Language Therapists we work with stroke patients and we all know how vital the Stroke Association can be supporting them and rebuilding their lives after a stroke. The charity have a huge range of support services and groups, including a dedicated 24/7 helpline.”

Those taking part included Louise, Annie and Jenny from our Early Supported Discharge team, Jess and Nicky from the Speech and Language Team based on the ward and Sarah, Evie, Sarah, Nic, Jo, Jo, Martyn and Annabelle also from the Acute Stroke Unit on Ward 1.

If you would like to support their efforts for the charity the team are still accepting donations via their Just Giving page at www.justgiving.com/fundraising/jpuhstroketherapyteam .