A walk around the Norfolk coast from Hunstanton Pier to Great Yarmouth’s Britannia Pier has bought a brand new reclining chair bed for one of the high dependency care rooms on our Children’s Ward. 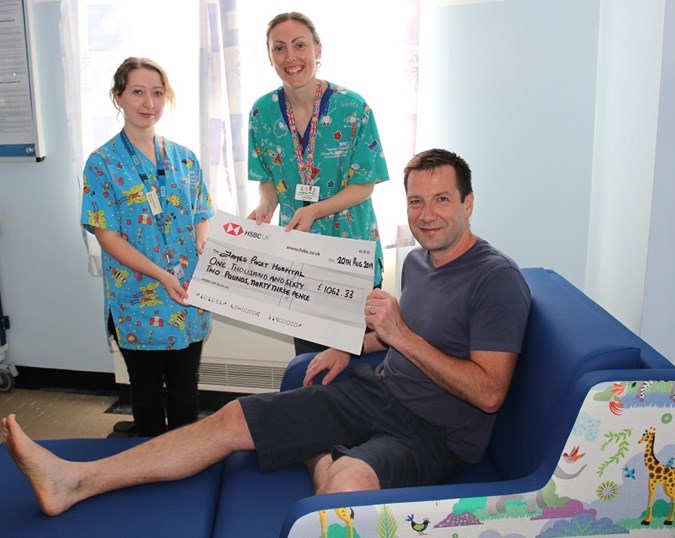 Daren Waters, who completed the 84 mile walk with colleague Sean Cockrell, and his family, friends, colleagues and supporters raised more than £1,000 through the three-day trek around the coast in May and today he visited our hospital to see what had been purchased with the money raised and donated to our Children’s Ward.

The new reclining chair bed will be put to good use in one of our high dependency care rooms, used when children are poorly and need constant monitoring, to allow parents to stay with their child and get some rest themselves. The bed has animal print sides and is easy to move for staff as well as being comfortable to sleep on.

Daren decided to fundraise for the ward after his young daughter developed an ovarian tumour and was looked after by the team before being referred to specialists at Addenbrooke’s hospital in Cambridgeshire.

Daren said; “Both hospitals were excellent and the care we received was second to none. But the James Paget, our local hospital, were instrumental in starting the care process and really deserve this.”
Children’s Ward Senior Sister Lisa King thanked Daren, and all those who supported him, for raising the amazing sum. “It’s allowed us to purchase the new chair bed which will make life a little more comfortable for the parents of young patients who need special care in future and we’re very grateful to Daren for his generosity.”
Much of the walk was completed on the sand and shingle of Norfolk beaches and Daren would like to thank Sandy Hill Caravan Park at Sea Palling, who donated a night in a caravan free of charge to support his efforts, and the Sea Palling restaurant that stayed open until after 10pm to feed the hungry walkers!