Following a competitive process held earlier this week, the Trust’s Council of Governors has formally confirmed the appointment of Anna Hills to the role. 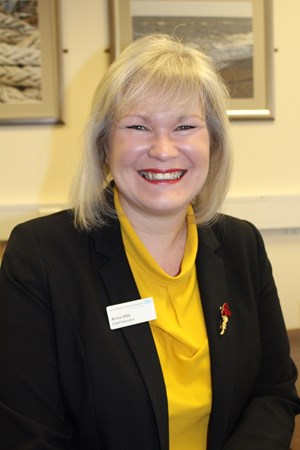 Anna takes up the position after Christine Allen moved to a new role as Chief Executive of West Hertfordshire NHS Trust earlier this year after more than five years at the James Paget. Anna will begin in post immediately, having been interim Chief Executive since Christine’s departure.

Anna, who is from Lowestoft, said she was thrilled to have been successful – and was looking forward to leading the Trust.

“It’s a real privilege for me to be Chief Executive of this fantastic organisation,” she said.

“I believe that the staff at the James Paget are second-to-none – and they are the reason we have achieved three successive ‘Good’ ratings from the Care Quality Commission, which each time has highlighted their dedication and compassion for patients.

“I am looking forward to ensuring that the James Paget continues to develop and improve, both as an organisation, and in terms of the healthcare services and facilities it offers.

“At the same time, I am excited to be continuing to develop and strengthen our partnerships with health and care organisations across Norfolk and Waveney, to ensure that our Trust continues to play a key role in designing sustainable services for the future.”

Anna started her career in healthcare at the James Paget in 1992, working as a Clinical Orthoptist.

Similar roles followed at Ipswich Hospital and West Norwich Hospital before she returned to the James Paget as Clinical Governance Manager in 2000.

Following five years working as a healthcare performance specialist for PricewaterhouseCoopers across the Eastern Region, Anna became the James Paget’s Assistant Director of Governance, Safety and Compliance in 2009; Director of Governance and Workforce in 2015 and then Deputy Chief Executive from April 2018.

Anna’s appointment comes after a rigorous competitive selection process held on Tuesday 30 July, which included a stakeholder focus group with members of the Board of Directors, Council of Governors, Hospital Management Board, Healthwatch and local organisations in attendance.

The formal interview panel was chaired by Trust Chair Anna Davidson and included representatives from NHS England/NHS Improvement and the Norfolk and Waveney Sustainability and Transformation Partnership (STP).