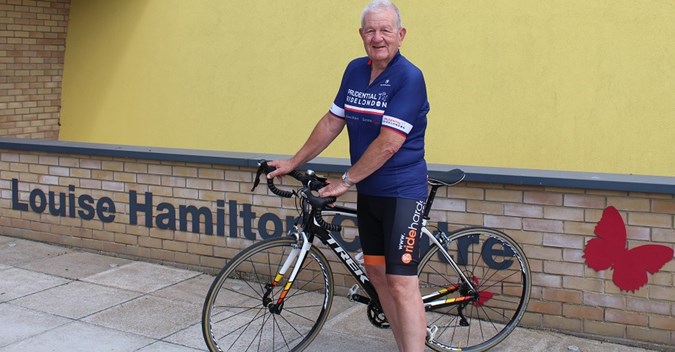 A 75-year-old Beccles man who underwent bowel cancer surgery at the James Paget is embarking on the 100-mile RideLondon cycle event in August to raise money for the Louise Hamilton Centre – just nine months after the major operation.

Dave Walden will take part in the Prudential RideLondon-Surrey 100 event on Sunday 4 August, cycling on closed roads in the capital and countryside – and up the daunting Leith and Box Hills – to raise money for the Centre as his way of saying thank you for the care provided by James Paget staff.

Dave came into the hospital in November for his operation, carried out by Bowel Cancer Surgeon Mr Vamsi Velchuru and his team, and said he had been looking for a way to give something back.

“Everybody from those who brought the tea round to the nursing staff, the operating team, and particularly Mr Velchuru, have been brilliant. I was in shock when I was first diagnosed but it has been a positive outcome and I’m now mentally in a good place and I wanted to thank the team for their support.

“I’ve always ridden a bike but only became a cyclist six years ago when I moved to Beccles. My interest grew and as I improved in ability my mileage increased, I joined a local club and got myself a modern carbon bike. I decided to enter the ballot for the 2019 Prudential RideLondon 100 as a personal challenge, but within days I was diagnosed with bowel cancer. The news that I had been successful in the ballot made me determined to get back to fitness.
“Following the surgery I had to ease back into it but I was only away from it for three months and I now routinely do around 50 miles and hope to build this up to 85 before the day.

“The level of care I received, and am still getting, from James Paget University Hospital has been fantastic at all levels. For that reason I decided my charity should be a local one to the hospital. I now attend a support group at the centre and have seen what amazing facilities it provides.”

Specialist nurse Linda Sawer, who has supported Dave through his treatment, said; “Dave is an inspiration to all patients living with a cancer diagnosis and facing a significant operation and post-operative treatment. He’s very good at playing down what he has been through but this was major surgery – a six hour operation - I’m in awe of him.”

Anyone who would like to support Dave’s efforts to raise funds for the Louise Hamilton Centre can visit https://uk.virginmoneygiving.com/DaveWalden or drop off a donation at the Centre.