Identifying the signs of domestic abuse and coercive control 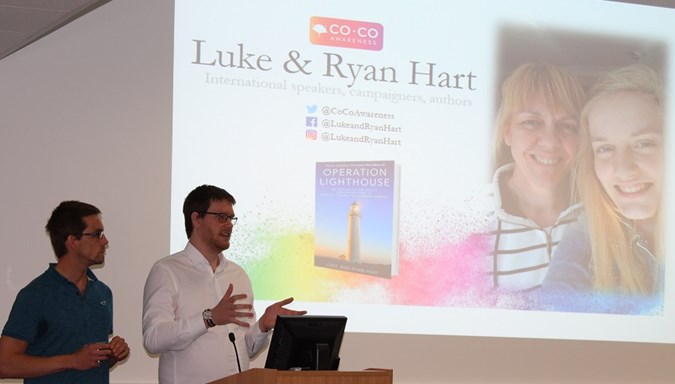 Two brothers whose mother and sister were murdered by their father have visited the James Paget today to talk our staff and guests to raise awareness of domestic abuse and coercive control.

Years of controlling behaviour preceded the killing of Luke and Ryan Hart’s mum Claire and their 19-year-old sister Charlotte in Spalding in Lincolnshire in July 2016. The case made national headlines when their father shot the two women outside a sports centre in the town and then killed himself.

Luke and Ryan have carried out a series of seminars across the county, organised via Norfolk Safeguarding Adults Board, to share their story and to raise awareness that domestic abuse is not always about physical violence, but is about controlling behaviour.

Their talk begins with a video of their mum and sister – a compilation of photographs and moving images that was played at their funeral to remember them. It shows a little of their personalities, their love of dogs, family memories and apparently ‘normal’ lives but, as Luke and Ryan explain, their lives were not normal after three decades of controlling behaviour from their father.

On the surface excessively friendly to those outside of the family, he was perpetually angry inside the home with the brothers relating how one of them dropping a plate could result in him yelling at the family for days.

They tell of how financial control kept their mother poor – her earnings from working in a supermarket were taken from her and she was given just the bare minimum to feed and clothe the family while their father gambled and gave money away online.

Luke says; “We were constantly fed the narrative that we were a normal family and we never considered that to be controlled was abuse. It felt wrong but it was never violent – it was a aggregation of abuse. We were overly compliant as we were terrified of breaking the rules.”

It wasn’t until several days after the murders, when the brothers were sitting in Spalding Police Station and spotted a poster detailing coercive behaviour that they realised that it described all their father’s attributes.

Luke and Ryan shared their shock at how the killing of their much loved mum and sister were portrayed in the media – with reports trying to justify their father’s behaviour and the women almost being held responsible for his actions.

Meanwhile the police investigation revealed that their father had been isolating their mum from the start – moving Claire and Luke from friends and family to an isolated rural property when Luke was just three years old.

Luke says; “Silence is what the abuser wants…we need to be braver and ask personal questions – change only comes by beginning to talk. Domestic abuse survivors have no shortage of strength but victims learn to live with the controlling behaviour that kept my mum trapped. Only when we understand that domestic abuse is about control and cutting off means of escape can we help those trapped in similar situations.”

At the James Paget we have domestic abuse champions who you can speak to – they wear blue badges with a white ribbon design on. If you are concerned about an adult you can contact Norfolk Safeguarding Adults Board on 0344 800 8020 or you can visit organisations such as www.waveneydvforum.org.uk ,  www.leewaysupport.org or www.lighthousewa.org.uk for more information and advice.