Patients to benefit from Octopuses

Patients living with dementia and stroke patients at our hospital are set to benefit from an initiative which provides knitted and crocheted Octopuses to premature babies.

A former student nurse, Megan Proctor, supports ‘Octopus for a Preemie’ – a group who crochet and knit little Octopuses for babies who come into the world a little earlier than expected. The Octopus has carefully made tentacles to occupy tiny fingers, reducing the risk of them pulling at medical tubes and providing comfort while they are in hospital.

Megan recently qualified as a nurse and, as she completed her time at the James Paget, she made little octopuses for several of our clinical educators including Kate Rust as a thank you. Kate was on a visit to the stroke ward when she had the octopus with her and it was remarked that they would be good for stroke patients too.  Megan then approached the group to see if they would support them being given to older patients. Now the James Paget are being given a monthly donation of Octopuses to help calm dementia patients and to increase grip strength and dexterity in stroke patients.

Kate says; “The octopuses will be placed in our on-ward dementia boxes, which hold items to support patients living with dementia, and used on Ward 1, our stroke ward, to be given to patients who may benefit from an octopus. They are very calming and soothing but also are good for improving dexterity and grip strength so can be used to relax and rehabilitate. We know these will make a real difference, as well as providing a little fun for patients and staff, and we’re grateful to Megan and the group for their support.” 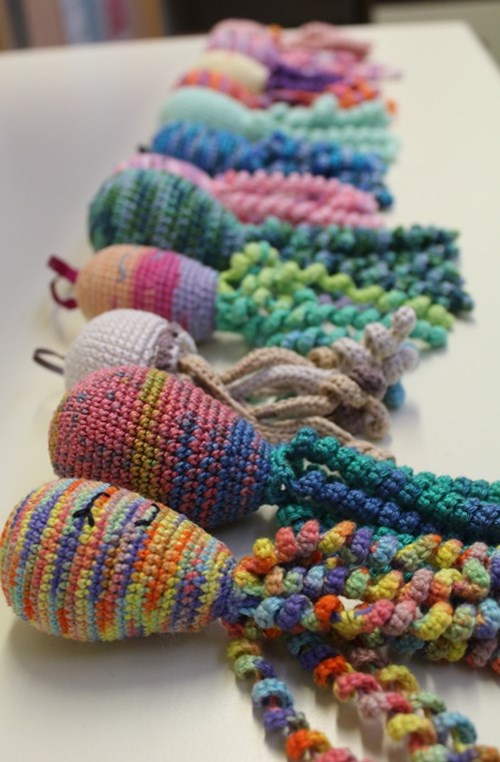