An imaging assistant at the James Paget will be one of the first people in the country to take a new Diagnostic Radiographer Degree Apprenticeship after being selected for a new programme at the University of Exeter. 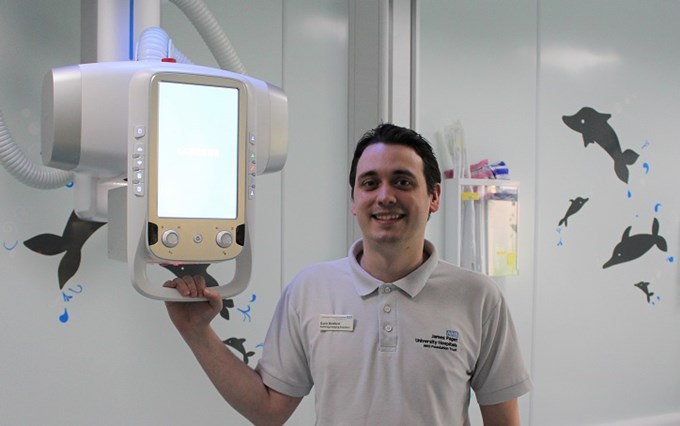 Gavin Bedford started at the James Paget soon after leaving school, joining the radiology department in an administration and portering role via an agency. When the agency contract ended he decided he wanted to stay and successfully applied for an imaging assistant job in our Radiology department X-Ray team.

Now, 11 years on, he’s taking a new step to develop his career via the apprenticeship honours degree in radiography that has just been introduced at the University of Exeter – the first time the degree course has been provided as an apprenticeship, which means he can continue to work at the Paget while studying. While the University has offered a BSc (Hons) in Medical Imaging degree programme since 2004, this is the first time this has been offered as an apprenticeship degree.

Gavin says; “I knew I liked working in the department, and was considering radiography, but with a mortgage to pay I couldn’t afford to take a degree at university to progress to the next level. It was really exciting when I heard they were going to offer this as an apprenticeship which means I can continue to work here while completing the degree.”

The new course, which starts in March, involves three residential weeks at the University of Exeter each year of the three-year degree with the rest of the time spent learning in a hospital environment, which means Gavin can continue to learn from his colleagues in the department he’s already familiar with.

Gavin said; “Managers here have been very supportive and I was interviewed here and accepted. Although the process, including application and getting things together, has been quite quick, I really want to get started now. It’ll be a massive step up and I’m really looking forward to it all.”

It’s hoped that Gavin may be the first of many as several of his colleagues have also expressed an interest in taking the new apprenticeship degree course. This will help the hospital to continue to ‘grow our own’ and create another pathway for training future radiographers.