A senior nurse at the James Paget has received a prestigious award for her work – just months after being made an MBE.

Jacky Copping, who is the hospital’s Deputy Director of Nursing, became an MBE in the New Year’s Honours List for her services to nursing during the pandemic.

Now, four months later, Jacky has received the prestigious Chief Nursing Officer Gold Award – one of just a handful given out nationwide to nurses to recognise outstanding achievements in the field of nursing.

The award was presented virtually by Chief Nursing Officer for England Ruth May, with the actual badge being given to her in person by the James Paget’s Director of Nursing, Paul Morris (pictured with Jacky below). 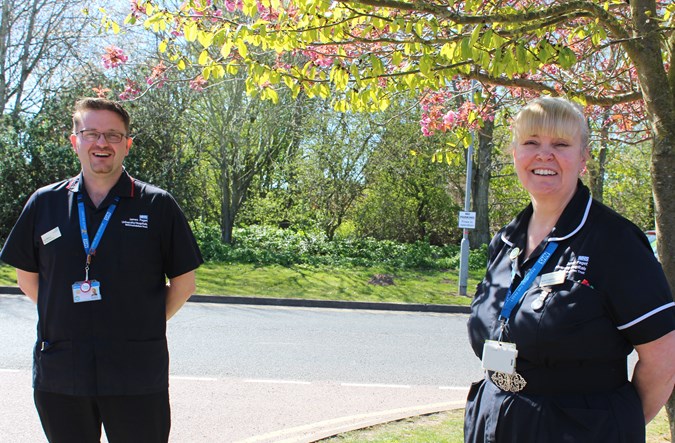 “I feel extremely proud to have received such a prestigious award from the leader of the nursing profession,” said Jacky, who started her career as an enrolled nurse at the James Paget more than 34 years ago.

“We are very much a team here at the James Paget – and I would not have been awarded this special ‘gold’ award without the support of my amazing nursing colleagues, who are so dedicated to providing safe, compassionate patient-centred care.”

Jacky, from Beccles, became a registered nurse in 1987 and then specialised in orthopaedic nursing. In 1998, she was promoted to senior sister, overseeing the newly-opened orthopaedic rehabilitation ward at Lowestoft Hospital.

Director of Nursing Paul Morris said: “Jacky is a highly respected nursing leader here at the James Paget – and all her colleagues were absolutely delighted that she has received this prestigious award, which is thoroughly deserved.”