New equipment for recycling surgical waste – including fluids and metals – have been introduced at the James Paget as part of continuing Environmental work at the hospital.

In addition to our solar panels, which generate electricity to partially supply the hospital, and recycling, reusing or recovering energy from over 325 tonnes of assorted waste a year, our Environmental team are always looking for new ways to improve what we do, to benefit our patients, our staff and the environment.

This work includes all sorts of initiatives to reduce waste, recycle more effectively and reuse items across the hospital, including making changes in areas that might not be immediately obvious.

The disposal of fluid waste during surgery is not something that many might want to give thought to, but for our surgical team it is something they have to deal with every day.

During surgery someone needs to keep a close eye on fluids in and fluids out of patients and, as fluids are suctioned away during surgery, this normally means numerous containers are filled with body fluids and these containers frequently need changing. This means fluids often need to be cleaned from the floor after procedures, resulting in staff having an extensive clean-up job before the operating theatre can be prepared and used again, and in the use of large quantities of absorbent cleaning materials.

Now the introduction of new Stryker Neptune waste management systems is helping collect, transport and dispose of surgical waste fluid in a closed environment, within a single machine, reducing the clean-up waste, creating a safer environment for our staff and meaning operating theatres can be used again more quickly, resulting in more patient capacity.

The new machine collects fluids suctioned during surgery and stores them until they can be disposed of safely via a hygienic unit which the machine is linked up to.  The fluids can then be disposed of via the hospital’s waste filtration system. 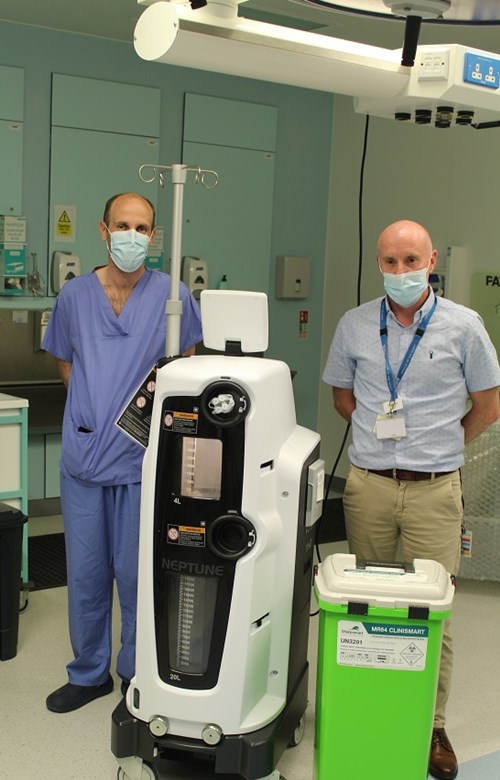 The introduction of the new Neptune units are down to Trust Waste Management Specialist Peter Huttley and Clinical Operations Manager Tom Williams who successfully submitted their case for funding.

Peter says; “Working together we were able to outline the benefits that the systems could bring, including making the working environment safer, reducing the amount of waste that needs to be disposed of, and reducing the time needed between patients to free up operating theatres. The machines are reducing the risk of slips and falls, and have reduced the materials needed for cleaning. In carbon impact terms it is estimated that the system will save 36,000 litres of waste each year – equivalent to stopping over 31 tonnes of carbon being released.”

Peter and his team have also introduced new green-coloured metal recycling bins for specialist sharps waste in theatres. The bins - from Sharpsmart, a clinical, sharps and hazardous waste disposal company – capture metal instruments that will go through a sterilisation process prior to the metal being sent for recovery.

Both of these add to a list of systems used for reusing and recycling at the hospital.

Peter says; “We want to reuse and recycle as much as we can so we are increasingly looking at all areas to see what can be done to reduce waste. We already have a range of measures in place including cardboard recycling, plastic and paper recycling bins in offices, medical equipment sent for onward sale or reuse and we recycled 87% of the 165 tonnes of clinical waste produced from the hospital in the past 12 months.

“We often have to stop using some electrical equipment, such as fridges, if they start to show signs of wear or tear, so we now have a partnership with organisations who can refurbish these and pass on to people who need them, including refuges and housing projects. Ultimately we want to be as sustainable as we can be.” 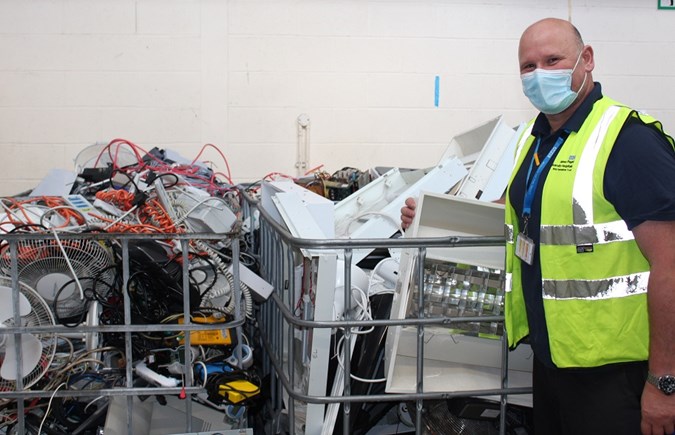 Some of the items being disposed of through electrical waste recycling