Some wonderful mobiles have been purchased for our Neonatal Unit after the cycling efforts of six-year-old Jake raised hundreds of pounds to support our smallest patients and their families. 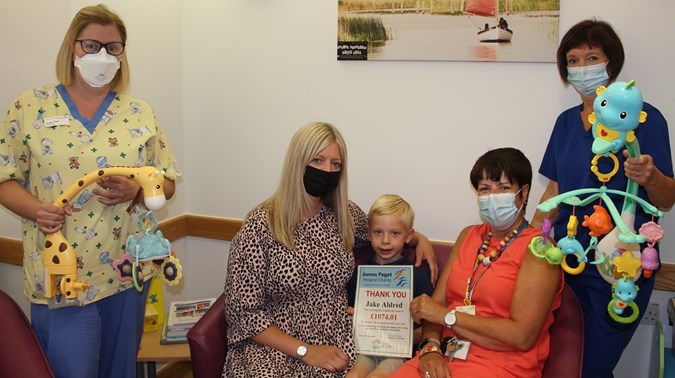 On one of his regular bike rides, young Jake Aldred decided he wanted to complete a sponsored cycle to raise some money for a good cause. After lots of discussion about different charities, Jake chose to do the ride to help the babies in our Neonatal Unit.

He completed his 12-mile bike ride at the end of May and raised more than £1,070 through sponsorship and donations in the process.

Yesterday he visited our hospital to see some of the mobiles the money raised has bought, and he raised so much that the additional funds will also purchase a bed for parents to use while their little ones are on the unit, and some other items, including story books.

James Paget Charity Co-ordinator Maxine Taylor, pictured here with Jake, his mum Becky and some of our neonatal team with the new mobiles, said; “We’d like to say a big thank you to Jake for his amazing fundraising.  This was an incredible amount to raise and the money will really help babies, and their parents, on the Unit.  Thank you to Jake, Becky and everyone who contributed.”