Shirts worn by Norwich City players, and other football-related items from the club, have raised over £15,000 for Norfolk’s three main hospitals.

Among the items raising the most funds were a Norwich City squad signed shirt which sold on the auction site eBay for £780 and a pair of shorts worn by Todd Cantwell which sold for £107.

Forty-four items were sold, including shirts worn by players for the club’s game against Preston North End on Good Friday which featured an NHS rainbow logo. A total of £15,243 was raised with proceeds from the auctions split between the James Paget, the Norfolk and Norwich University Hospital, and the Queen Elizabeth Hospital in King’s Lynn.

Maxine Taylor, James Paget Hospital Charity Co-ordinator, said; “This is a fantastic achievement and we’d like to say thank you to Norwich City players, staff and supporters for making this possible.”

The monies will be used to enhance support, wellbeing and facilities for staff at the James Paget. 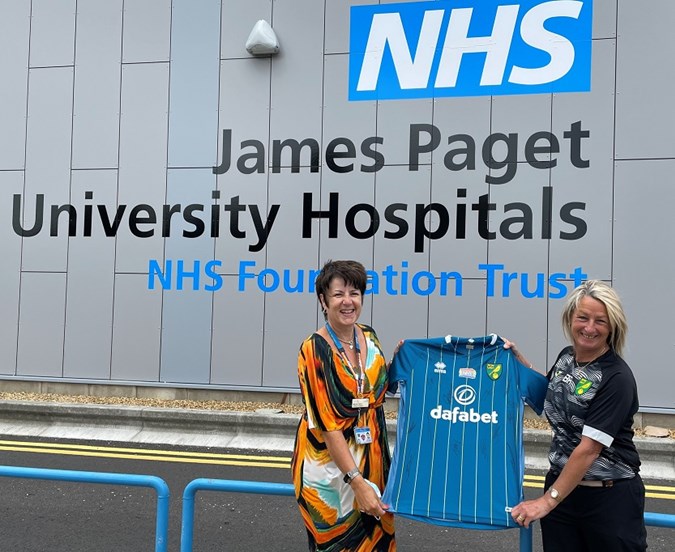 Our photo shows Belinda Rowe, Kit Assistant at Norwich City Football Club, presenting Maxine with an additional signed shirt featuring the NHS rainbow logo, which will be auctioned at our Sixties evening in October to raise further funds for our charity. Our staff will have the opportunity to place a bid via a silent auction for the shirt prior to the event too.