Clinical research experts at the James Paget University Hospital have played a key role in a European trial aimed at countering life-threatening peanut allergies in children.

Consultant paediatrician John Chapman and his clinical research nurse colleagues Lynsey Felton and Donna Griffiths oversaw the local trial of a drug which aims to build tolerance of peanut in young patients.

Peanut allergy is one of the most common food allergies and affects more than 6 million people in Europe and America. People with the allergy can suffer severe and potentially life-threatening reactions if they ingest even a small amount of peanut.

Two local patients, both in their teens and being treated for peanut allergies at the James Paget,   were put forward for the trial, known as ARTEMIS, which has just been completed.

ARTEMIS involved a total of 175 children from seven European countries. It saw the young patients receive steadily increased doses of the drug over a period of up to 40 weeks, under strictly controlled conditions, while others received a placebo.

Locally, the results were also encouraging, with one of the two children able to eat a small amount of peanuts without any allergic reaction by the end of the trial.

“This was a very important trial as there are currently no treatments available to tackle peanut allergy,” said Dr Chapman.

“Many foods contain peanut protein so to have an allergy to it really restricts what you can and can’t eat, which can be really difficult and distressing for young people.

“I would like to thank our two young patients and their parents for taking part in this trial, which has helped add to our understanding of peanut allergies and moved us closer to an approved treatment for this condition.”

The drug involved in the trial – coded as AR101 – has been developed by California-based biopharmaceutical company Aimmune Therapeutics.

The company has submitted a licence application to manufacture the product in the USA, following successful trials held there – and, within the last two weeks, has done the same in Europe with the submission of a Marketing Authorisation Application to the European Medicines Agency.

Looking ahead, the paediatric research team at the Paget has just recruited the first young patient in Europe for a peanut de-sensitisation trial involving children aged under four years. 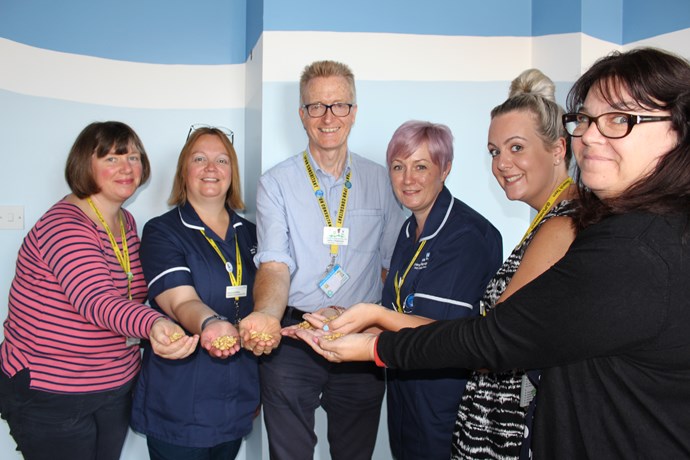